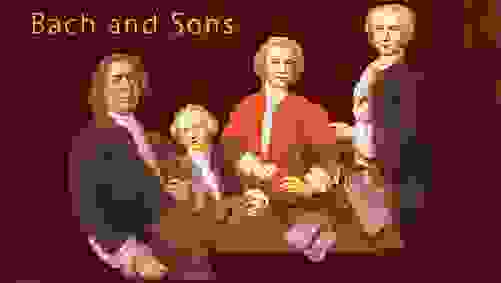 "It was cold … the kind of bitter cold that makes the snow squeak painfully when tread upon.” He was 10 years old, his younger brother Jakob was 8. Both of their parents had died within 6 months of each other. They stood outside what was their home, looking at each other. There was nothing left to do but walk 30 miles through the storm to their older brother Christoph’s. They could only hope that he had room and would take them in.”

Thus, launches the story of Bach and Sons. The music is just the beginning.

Bach and Sons is a live organ performance with multi-media. It is performed by Dr. Jeannine Jordan, organist and David Jordan, media artist.  It is the story of Johann Sebastian Bach and his family.  It is told from the perspective of four women important in Bach’s life.  Dr. Jeannine Jordan performs the organ music of Bach and his sons, Wilhelm Friedemann and Carl Philipp Emanuel while David Jordan's media talents bring the story to life visually.  Live projection on a cinematic-sized screen from five different cameras show Dr. Jordan's playing.  This live projection is interspersed with video and images.  These images take the viewer to Bach's Germany.

"One might think of Bach's music as being just fugues and toccatas but it also consists of beautiful listenable melodies and harmonies that Jeannine plays with feeling and pleasing tonal selections.  The narrations and music explore the Bach family story and we hear the music and discover the inventor and perfecter of music of the western world through Bach and Sons."  .....Bill Gregory, organist, Gleneden Beach, Oregon

All images from our live concert